I’m not really sure why I’m writing this.  I suppose it’s because I wanted there to be some record, some digital memory, of the brief time we shared.  But whatever the reason, there is something I want you to know.

My family and I volunteer with a local rescue organization.  We take in homeless kitties, give them food, shelter, and love until they find a forever home.  A few months ago, we took in a family of eight:  a mama and seven kittens.  One of the kittens, a tiny calico, would one day be your sister.  She was only about two weeks old when she came to live with us.  That was this past June.  But up until about two weeks ago, I didn’t know you existed.

You see, you were living with another foster family.  Some people from out of state found your picture, and the picture of your soon-to-be sister, on the internet and decided to adopt both of you.  Until they could come get you, they requested the two of you be placed together to get acquainted, so the plan was for your sister to go be with you.  But your first foster family had to go out of town, so the rescue organization asked us if we could take you in instead.  Of course, we said yes.

By that time, all of you were old enough to roam the house, except at night or when no one was home.  During those times, we put you and your sister in our bathroom together.  It’s a large room with lots of toys and things.  Just about every cat we’ve ever had started out in that room.  You both seemed happy in there.

A day or so after your arrival, it was a weekend, so I let you all out to explore.  I came in about mid-morning and plopped down on the bed to look at the most effective time-wasting invention ever made:  my cell phone.  While I was browsing, you climbed up on the bed, walked straight over to me, and crawled on my chest.  Then you rested your chin on my mouth, with your nose touching my nose, closed your eyes, and went fast asleep.

My first thought was, “Uh-oh.”  I’m just sorry I didn’t get a picture.

At first, I brushed it off as a one-time thing.  But over the next several days, you made your preferences known.  Anytime I was on or in the bed, you were there, too, right on top of me.  You wrapped yourself around my neck,

snuggled under my chin,

cozied up next to my face,

or piled up on my chest.

Yes, you really loved to snuggle.

And I decided I wanted you to live with us forever.

But there was a problem:  you were promised to someone else.

I contacted the rescue organization and explained what I wanted to do.  They said they weren’t sure if anything could be done, but they would try to work things out.  I was hopeful.

A few days later, they found another kitten who looked a lot like you.  They contacted the family to whom you had been promised and asked if they would be willing to take him instead of you.  After all, they had never even met you.  Guess what?  They said yes!

It was a Friday night when I found out.  I was so happy!  I went straight to you, picked you up, hugged you tight, and said, “It’s official!  We belong to each other now!”  You purred loudly in response.

But it lasted for only about one day.  And I wasn’t even there.

The next day, Saturday, our first true day as a forever family, I went to a football game.

It was only the third game I’ve attended in over forty years, and the last time was seven years ago.  Our human daughter asked me for years to take her to a game, and we looked forward to that day for several weeks, so off we went.  We got home very late that night, and you were already asleep in your room.  I remember looking forward to Sunday afternoon.  No one else would be in the house but me, you, and all the other fur babies.

In my spare time, which isn’t very “spare” at all, I’m an author and screenwriter.  There were a couple of movies I wanted to study, so I planned for us to pile up on the bed and spend the afternoon watching them.  But there was something I wanted to do first.  That morning after I got up and fed all of you, I grabbed my time-waster and posted several pictures of you and me with the announcement:  “It’s official!  Meet the newest addition to the family!”  Everybody loved those pictures.

A few minutes later, I noticed I had an unread message.  I opened it, and …

I felt the blood drain from my face.  The family from out of state had changed their minds.  In fact, they did so within about two hours of agreeing to the swap, but no one knew until several hours later.  The unopened message I found was sent at 10:10 PM the night before, a little over 24 hours after I was told you were mine.

I tried everything.  I pleaded with the rescue organization.  I offered to pay the adoption fees for both kittens for the other family.  Then we threw in an offer for $500 cash, on top of the fees.  Nothing doing.  Your new family wanted you, too.  Finally, I wrote a letter explaining the whole situation that was taken before the board at the rescue organization.

They ruled against us.

Devastated doesn’t begin to describe my grief.  And I was not alone.  Several of my human friends were more upset than I’ve ever seen them.  They told me to take you away.  Run.  Hide.  Slam the door and tell the world to …

Oh, how I wanted to do just that.

But there was another problem.  If I kept you against the wishes of your new family, that might bring trouble for the rescue organization.  I couldn’t let that happen.  And somehow, I didn’t think you would want that, either.

After all, they saved you.

Even now, some of my friends still want to make trouble.  But that kind of trouble, a bad reputation or even legal issues, could be a very bad thing.  And I don’t think they’re bad at all.  They tried.  They really did.  They’re hurting, too.  And they are about as picky as anyone I’ve ever seen when it comes to allowing people to adopt their kitties.  Trouble for them could put other kitties at risk.  It might prevent other fur babies, just like you, from finding their forever homes.  No one wants that.

So I talked them out of it.

In a way, I have to admit I’m at least partly responsible.  Perhaps I should have left you locked in the bathroom the whole time.  But I didn’t.

I don’t want you to worry.  The rescue organization checked out your new family.  They are a wonderful family and will take good care of you.

By now, you are at your new home with them.  Although I don’t even know their names and have never met them, I sent them a signed copy of a book I wrote about another cat.  He was very special, too.  You remind me of him.  In the book, I included an inscription that reads, “May your lives together be long, happy, and blessed.”

I also included this picture.  It’s a little blurry, but one of my favorites.  Just you and me.  Together.  On the back I wrote:  “Sterling and Jonny, Oct 2016.” 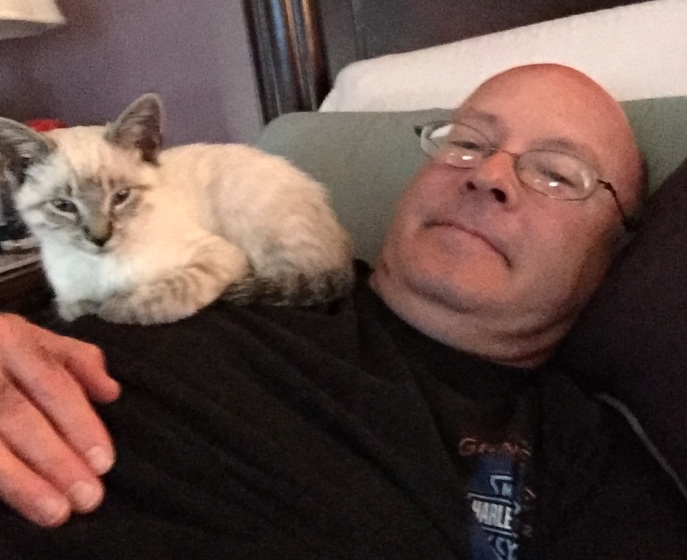 I will never forget you.  I know we will see each other again one day, but I hope it’s many, many years from now.  I want you to live a long and happy life first.

Remember I said there was something I wanted you to know?  Well, here it is:  if there is anything you are not, and never will be, it’s unwanted … or unloved.

Have a great life, my friend.  I’ll meet you later.  Hopefully, waaaaay later …

Your Daddy for One Whole Day,

2 thoughts on “To Sterling, With Love”