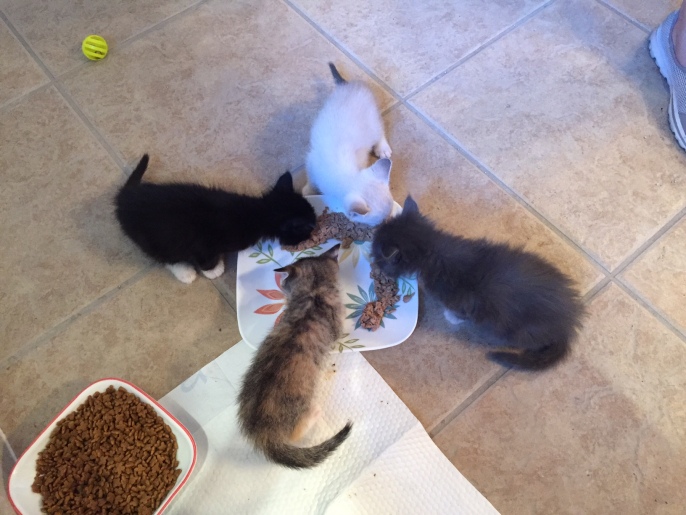 So we’re down to four foster babies and the mama.  There were originally seven, but the other three are together with one of the Madison Animal Rescue Foundation (MARF) ladies, and I hear they are doing well also.  Now, want to get to know these?  We have names and sexes now, too!

In keeping with the attempt to stick with names beginning with “M,” meet “Mini-Me.”  Mini-Me is most definitely her mama’s favorite, and she’s a “she.”  All she has to do is … well, nothing … and mama (Miri, for “Miracle”) comes running.  This one fell asleep in my lap the other day.  I couldn’t move without disturbing her, so I didn’t.  And my leg went to sleep (I was on the floor in the bathroom).  That’s ok though.  She deserved a little daddy time.

This is “Mint Julip,” and she’s another “she.”  LOVES to snuggle and give kisses, especially under my chin.  Must be my whiskers.  She licks and kisses and sniffs right on my mouth sometimes.  She’s a stout little thing, too.  I mentioned in an earlier blog about her fur.  It’s a little different from the others’.  I like it.  It goes with her sweetheart of a personality.

This is “Mandy,” and she’s King (I mean, Queen) of the world!  She climbed up there all by herself.  That’s Miri, the wonderful mama to these sweet babies, on the floor.  Mandy is actually from another litter, but Miri took her in like one of her own.  She’s about a week and a half younger than the others, but don’t tell her that!  She’s a big girl, too!

Ok, we tried.  We really did.  But we couldn’t seem to agree on a name for this “little” guy.  So, meet “Tank.”  That’s right.  The MARF lady named him Tank, and the last time she was over, she and Caroline pawed all over him.  It doesn’t look like he’ll be going to any Adoption Days.  Caroline has claimed him.  Yep, it’s all over.  He’s got Caroline wrapped around his paw pinky.  He’s the biggest of the bunch, and the most laid back.  He usually sleeps all sprawled out instead of in a ball.  Precious.

So there they are!  They’ll be ready for adoption in about a month.  Stay tuned for further updates!

Jonny and Caroline, the “Suckers”