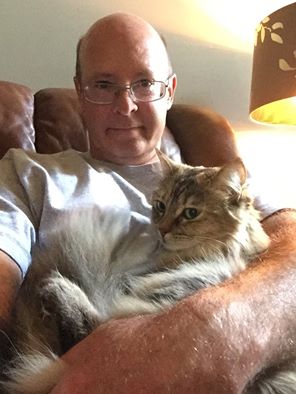 I explained that I was supposed to be doing clothes, but Chanel decided she wanted some Daddy lovin’.

A few minutes later, a friend of ours posted this picture in a reply: 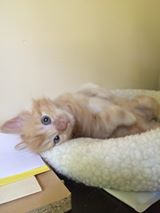 Her comment was, “I have a special darling male kitten needing his forever home….”

I sent her a private message that I got her “hint,” but that I just wasn’t ready yet.  My beloved Little Man had passed away only very recently, and there was a lot going on.  I was preparing to get started on the sequel to Little Man’s book, and …

A few minutes later I sent another message and said, “Alright, gosh darn it, what can you tell me about the little guy?”

As it turns out, “some drunk redneck” was overheard by a friend of hers bragging that he had shot and killed the mama cat and then had thrown the kittens into the woods.  Her friend rescued the kittens and brought them to her.

I went that very evening to check him out.  When I arrived, the kitten was immediately placed into my arms.  The first things he did was kiss me right in the mouth, then again on the tip of my nose, and lick me on my chin.  Then he settled down for a little nap right there in my hand: 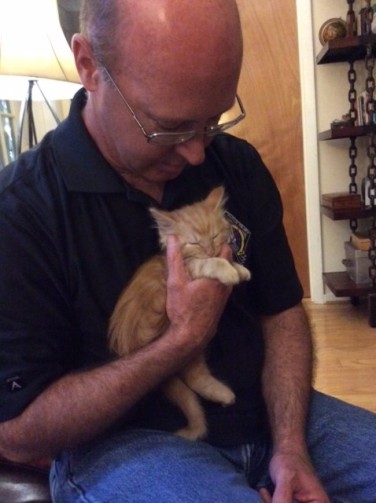 I should have known it was all over.

Caroline and I went the next evening to pick him up.

A few days later I took him upstairs to the man cave where Little Man and I had spent so much time together:

And life goes on.

Mighty Little Man:  My Story, His Story, Our Story, has just reached an important milestone.  The book has received its twentieth review on Amazon, and so far, every review has been at five stars!  Woohoo!!

Stay tuned for more exciting news about Little Man, for his story is not yet over. 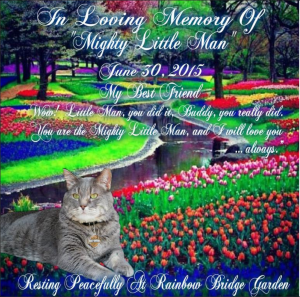 It was a day I have dreaded for a very long time. I made one huge mistake, however. I worked so hard for so long to prepare for “the moment” that I completely forgot to prepare for “the after.” Little Man’s passing has affected me more deeply than anything I have faced in life so far, and anyone who has read our book about our lives together will understand that that’s saying something.

I’m still going through a tremendous amount of sorrow. Mealtimes and weekends are the worst. That’s because those were “our times” together. I still find myself looking for him under the dining room table and in his chair where he usually slept, and it took days before I could bring myself to put away his bedding. I had my favorite picture of him enlarged, and I hung it in the garage above his favorite place to rest—on top of my car. I don’t think I’ll ever get over losing him.

But I knew it was inevitable. Everyone dies at some point, but knowing that doesn’t make it any easier for those left behind, and each of us grieves differently. The crying, screaming, longing … they’re all part of the process. But I believe I’ve found a way to help me through the heartache until we are forever reunited.

One thing that helps is to remind myself that he no longer needs all that medication. At one point, he was on eleven different

things including vitamins and supplements. Those were the first things to go. But that wasn’t enough, and then I realized something else. 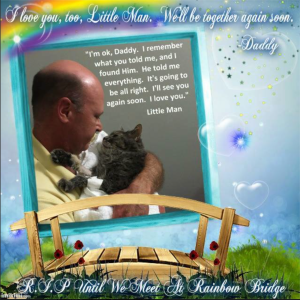 And he has THE best pet sitter. 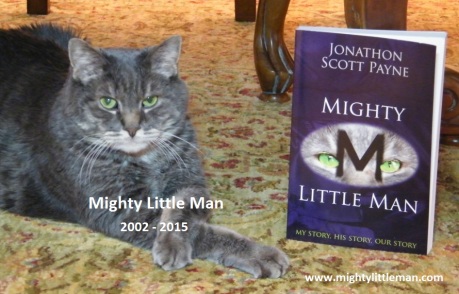 At 6:30 PM on June 30, 2015, as I embraced the pure innocence of one of God’s most precious creatures and the best friend I ever had, the Mighty Little Man took his last breath.  Considering the incredible events he survived, to live a full life of 13 years and 3 months was a remarkable feat to say the least.

Before he left, we had some quiet time together.  I petted him, caressed him, kissed him, and told him I loved him.  I also gave him some special instructions, and although the only people who will understand the following statement are those who have read our book, I told him one other thing — I told him her name.

But now I have something else I wish to share.

Within a few weeks after our book, Mighty Little Man:  My Story, His Story, Our Story, was published, I was featured live on WHNT News 19 in Huntsville, Alabama.  Near the end of the interview, the host, Carrie Marchese, showed three pictures of Little Man that she had downloaded from our website at www.mightylittleman.com.  Seeing those pictures shown live on the air was a complete surprise to me as I had no idea she had planned to do that.  As we sat in the studio and wrapped up the interview, the pictures were shown one at a time on the full screen, and I spoke a little about each one — but I was thinking something else.

I have decided to begin work on another book about Little Man.  Because of various events and discoveries since Mighty Little Man was published, I feel a second book is necessary.  The following words will likely grace the last, unnumbered page:

It is written in Hebrews 11:1, “Now faith is the substance of things hoped for, the evidence of things not seen.” I must confess, however, that I consider myself blessed among men, for I have seen the evidence of His work, and I have felt the substance of His presence.  Put another way, I have felt God through the love I shared with my furry, feline friend.  Even before I understood the severity of the devastation that would later befall me in which I would find myself alone in the dark and my world destroyed, God sent me Little Man.  I will cherish our bond forever.  I therefore wish to thank God for entrusting me with the care of one of His most precious souls and for giving him back to me, for a time, from the very brink of death as only He could.

I also wish to thank the world’s most preeminent cat, Little Man, for sharing his life and his perfect love with an imperfect man like me.  Along the way I always thought I was taking care of him, but in reality it was he who took care of me.

For some time to come, we will be apart.  But when Little Man and I are reunited for all eternity at the center of the Rainbow Bridge, I will pick him up, hold him close, look into his eyes, and repeat to him my thoughts from that day in the studio when I first came to know that the Mighty Little Man was destined for something very special, the same thoughts I now share with the world.

I will say, “Wow!  Little Man, you did it, Buddy, you really did.  You are the Mighty Little Man, and I will love you … always.”

I love you, too, Little Man.  We’ll be together again soon.